Cliven Bundy calls out sheriff in front of Metro headquarters 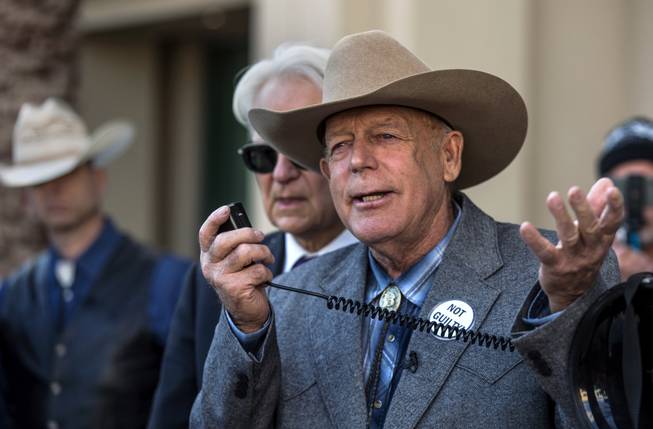 Cliven Bundy answers a question for the media as he holds a press conference in front of Metro Police Headquarters on Wednesday, Jan. 10, 2018. 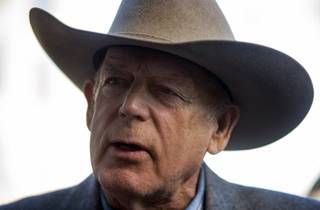 The meeting did not take place, so Bundy, 71, went on with the scheduled news conference, which was in part a gathering of supporters who cheered the rancher’s remarks.

This comes after the Bureau of Land Management began rounding up Bundy cows in April 2014 after obtaining court orders against Bundy for 20 years for failure to pay grazing fees and penalties to the federal government, and two days after being released following Chief U.S. District judge Gloria Navarro’s dismissal of a criminal case against Bundy and his two sons.

“I spent 700 days in prison as an innocent man and never did get through a trial,” said Bundy through a megaphone held by his wife, Carol. His message was meant for Lombardo, who the rancher has previously labeled a “liar.”

Bundy arrived at Metro to try to meet with Lombardo but was told by a representative that the sheriff was “too busy,” he said, noting he’d also invited him to attend the press conference.

As the event was held in front of a police station, officers could be seen in the area, but they stayed away. The agency said in a statement that Metro and Lombardo “respect the federal court’s decision in the Cliven Bundy case. Mr. Bundy has his own beliefs and has the right to express his opinion. (Metro) will continue to follow the law and has no further comment on this case.”

Bundy deems Lombardo as the top authority in the county, even above the U.S. president. “I want to ask him to come forward and act like he really is representing the people of Clark County.”

“This is the man that we have elected to protect our life, liberty, and property. We can only honor him and respect him in that position,” Bundy said.

Asked if he was thinking of running for public office, Bundy laughed and said, “We definitely need a new governor, we could use a new sheriff, and I don’t know we may even need to replace the county commissioners, too,” he said. “I can probably do the brand inspector’s job.”

He called the March 2014 incident a protest and contested it being a standoff. “It was 200 guns pointed at (protesters).”

“I either have to forgive these people or hold them accountable,” he said about the possibility of pursuing legal action against officials. “I’m not sure, I’m considering my actions.”

Bundy says that it’s up to people in states, not the federal officials, to manage vast expanses of rangeland in the U.S. West and said this week he doesn’t recognize federal authority, no matter who is president.

The Associated Press contributed to this report.