What the 432 Hz “Miracle Tone” Sounds Like: A Healing Frequency to Raise Your Vibration 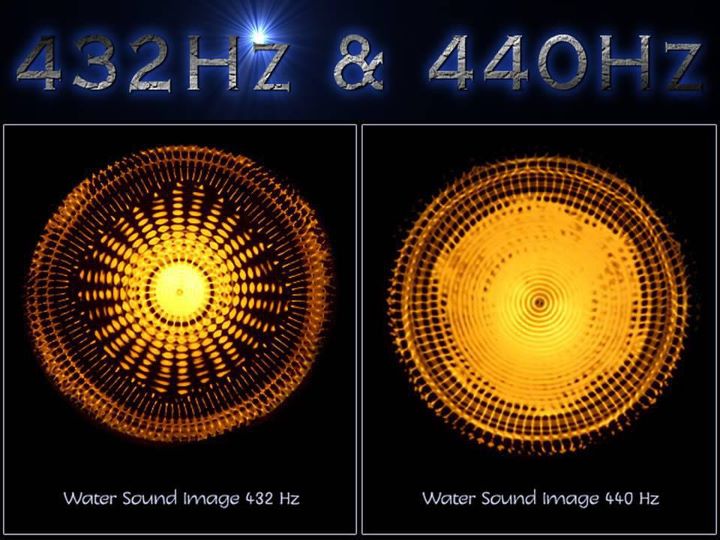 As sound healing becomes more popular, more and more people are starting to experiment with it. You have people learning how to chant, listening to specific frequencies, and using singing bowls. It’s not just those of us who are interested in spirituality and New Age concepts that are looking into this ancient Eastern knowledge, but scientists as well, studying these sounds and how they affect the body.

Though sound healing is only now beginning to enter into the mainstream, it’s been used as an ancient healing modality for many centuries in different religions. Even scientists such as Nikola Tesla and Albert Einstein spoke of the importance of viewing everything in terms of vibration, energy, and frequency.

“If you want to find the secrets of the universe, think in terms of energy, frequency and vibration.” – Nikola Tesla

Science has proven that everything is made up of energy and that everything holds its own vibration and frequency, which can then be increased or decreased. One person’s vibration that they’re emitting can then affect another person’s energy, and science has proven this interrelation through studying quantum mechanics and our electromagnetic fields or auras. You can read more about the research The HeartMath Institute is conducting on the heart’s aura and how we affect other people here.

With that logic, since sounds also hold their own frequency, wouldn’t it make sense that a specific sound’s frequency would affect that of our own?

The Science Behind Sound Healing

Dr. Herbert Benson, professor, author, cardiologist, and founder of Harvard’s Mind/Body Medical Institute, studied how sound healing, specifically mantric chanting, can help induce the Relaxation Response. The Relaxation Response is defined as an individual’s ability to prompt their body to release chemicals and brain signals that cause muscles to relax, respiration to slow, and blood pressure to drop.

The Relaxation Response can reduce symptoms of IBS and counteract the physiological changes of stress and the fight or flight response, including muscle tension, headache, upset stomach, racing heartbeat, and shallow breathing.

Dr. Ranjie Singh, a neuroscientist, writer, businessman, and global educator, found that chanting specific mantras releases the hormone melatonin, and this, in turn, offers many benefits, including tumor shrinkage and enhanced sleep.

Chanting has been found to oxygenate the brain, reduce heart rate, improve blood pressure, and calm brainwave activity. It can even cause the left and right hemispheres of the brain to synchronize.

Jonathan Goldman, American author, musician, and teacher in the fields of harmonics and sound healing, says:

Dr. Alfred Tomatis has utilized the sounds of Gregorian Monks to stimulate the ears, brain and nervous systems of clients. His work is very important with regard to the scientific and medical uses of sound and chant. He found that certain sounds that are particularly high in vocal harmonics will stimulate and charge the cortex of the brain and the nervous system. Some years ago, there was a very popular recording of Gregorian chanting that occurred just when this research was being made public. I know that many other types of chanting from different traditions have very similar effects. These are just a few of the hard physical phenomenon of mantric chanting that have been observed. There certainly are others, as well.

Another study performed in 2006 looked at the effects of transcendental meditation (TM), a form of meditation whereby the practitioner continuously repeats a mantra or chants, and concluded that TM can improve blood pressure and cardiac autonomic nervous system tone and decrease the risk of coronary heart disease.

[A]s far as we can tell, each brain center generates impulses at a specific frequency based on the predominant neurotransmitter it secretes. In other words, the brain’s internal communication system—its language, if you like—is based on frequency… Presumably, when we send in waves of electrical energy at, say, 10 Hz, certain cells in the lower brain stem will respond because they normally fire within that frequency range.

Additional research upholds the beliefs of mind-body medicine in this sense, stating that brainwaves being in the Alpha state, 8 to 14 Hz, permits a vibration allowing for more serotonin to be created.

Why You Should Consider Listening to A=432 HZ Music

Most music worldwide has been tuned to A=440 Hz since the International Standards Organization (ISO) promoted it in 1953. However, when looking at the vibratory nature of the universe, it’s possible that this pitch isn’t actually harmonious with the natural resonance of nature and may generate negative effects on human behavior and consciousness.

It’s said that A=440 HZ frequency music actually conflicts with some of our chakras that reside from the base of the spine to the heart. It is said that this music stimulates the ego and left-brain function, which can suppress our intuition. There are tons of conspiracies surrounding this frequency, and many seem plausible given the fact that the mainstream music industry incorporates propaganda and mind control.

432 HZ is said to be mathematically consistent with the patterns of the universe. It is said that 432 HZ vibrates with the universe’s golden mean, Phi, and unifies the properties of light, time, space, matter, gravity, and magnetism with biology, the DNA code, and consciousness. When our atoms and DNA start to resonate in harmony with the spiraling pattern of nature, our sense of connection to nature is said to be magnified. The number 432 is also reflected in ratios of the sun, Earth, and moon, as well as the procession of the equinoxes, the Great Pyramid of Egypt, Stonehenge, and the Sri Yantra, among many other sacred sites.

“From my own observations, some of the harmonic overtone partials of A=432hz 12T5 appear to line up to natural patterns and also the resonance of solitons. Solitons need a specific range to form into the realm of density and span from the micro to the macro cosmos. Solitons are not only found in water mechanics, but also in the ion-acoustic breath between electrons and protons.”

If you’d like to give it a chance, check out this beautiful music in A=432 HZ.