In the three years that Corey Goode has been revealing his stunning information about secret space programs, extraterrestrial civilizations, and diplomatic meetings, there has been a steady build-up to some major revelations about humanity’s future. It appears that a critical threshold was reached in a December 2017 meeting near the planet Saturn where multiple delegations met to discuss humanity’s future in light of the ending of 22 genetic experiments run by multiple human-looking extraterrestrial civilizations.

In a prior article, I discussed Goode’s report about an earlier December 16  “Super Federation” meeting he attended near the planet Jupiter involving over 60 human-looking extraterrestrial delegations, where he played the role of spokesperson for the Sphere Being Alliance. This is a group of higher density beings (6th to 9th density consciousness) who have been acting as a kind of Galactic umpire over the last few years to encourage diplomatic solutions to Earth’s multiple conflicts involving dozens of competing extraterrestrial groups, Inner Earth civilizations, global elites and secret space programs.

At the Super Federation meeting, Goode said he was told to relay to the assembled extraterrestrial delegations that their long-term genetic experiments involving humanity needed to come to an end and that humanity would be left alone to determine its own future. Despite some initial protests, Goode revealed that this decision was accepted by the Super Federation, making it possible for another diplomatic meeting a few days later (December 19-21, 2017) where the process for creating a new Super Federation governing human affairs would begin.

In the three years that I have been researching and writing about Goode’s incredible assertions, I have found no evidence of deception. Instead, I have found multiple sources corroborating his information from many different perspectives, e.g., whistleblowers/ insiders, documents, and contemporary events. 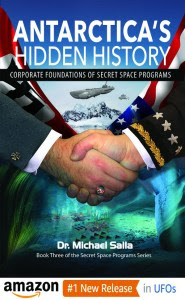 My research has been documented in three books so far which detail, compare, and analyze his amazing claims. Comprising over 1200 written pages and 1500 references, the clear conclusion reached in the Secret Space Program Series is that Goode is very credible, honest and truthful about the events he has witnessed and taken part in.

In addition, I have met and communicated with senior military intelligence officials who have likewise accepted Goode’s information as accurate, and have quietly assisted him with some very high-level national security information. If Goode were perpetuating a hoax, as some of his critics contend, I doubt that such high-level officials would be helping him.

For those drawn to the Corey Goode information, keeping an open and discerning mind is required to fully understand what he is telling us, and how it is relevant to our lives. Goode’s revelations not only inform us about key historical events and political processes that have not been publicly disclosed, but also what the future holds for us.

It’s quite clear that Goode has been chosen to play a unique and special role as a witness to extraordinary galactic events and meetings occurring today. He has no other formal role except occasionally acting as a spokesperson for the Sphere Being Alliance when they choose to appear at off-world diplomatic meetings where Goode is used to relay information to participants even when the Sphere Being Alliance members are physically present.

This was spectacularly demonstrated at a meeting in March 2015, where afterward Goode described how he appeared on stage along with two members of the Sphere Being Alliance before roughly 120 VIPs and delegates drawn from multiple secret space programs, global elites and private civilian groups at a secret facility on the Moon called Lunar Operations Command.  It was this March 2015 meeting that launched Goode into a series of meetings, abductions, and encounters which subsequently led to the December 2017 meetings that have become the most significant to have occurred so far.

It is Goode’s role as a delegate for the Sphere Being Alliance, and the status this accords him from the perspective of other groups and forces both on and off-planet, that requires us to keep an open and discerning mind to what he is telling us. Goode is giving us all vital information about events that lie ahead, and we should not be distracted by the noise of competing voices wanting to distract us, intentionally or not, from important galactic developments.

This takes me to the most recent galactic meeting that Goode attended, only a few days after the December 16 Super Federation meeting near Jupiter. He discussed both of these meetings in a January 13 article and his March 27 Cosmic Disclosure interview.

Goode described being taken to a nearly identical temporal anomaly near Saturn by representatives of seven Inner Earth civilizations. The craft that transported him had a total of 40 Inner Earth participants comprising the seven groups.

Intriguingly, Goode says that these Inner Earth beings are descendants of humanity’s future selves, a small group of whom time traveled into the distant past to maintain an optimal timeline. They did this to ensure that Draconian Reptilians would not overtly take over the planet, thereby establishing a global tyranny.

Goode says that when he arrived at the Saturn facility, he was met with representatives of 52 civilized worlds from the local cluster of stars in our region of the Milky Way. In his March 27 interview, Goode described the physical appearance of these representatives:

They were all humans of different types, and most of them were not Caucasian. They were different types of olive skin, brown skin, and even a kind of a tan skin. But they were representatives of each of the local 52 stars, and they are all basically our cosmic cousins. They are human beings, just different types.

He pointed out that one of these groups, the famed Olmecs who had mysteriously helped develop human civilization, were, in fact, extraterrestrial refugees relocated to Earth due to the Draconian control of their homeworld.

Goode elaborated about this in his March 27 interview:

Many, many, many times on Earth in our history, refugees have been brought from other planetary systems to stay here and live here, and they’ve lived here for many generations at times. That was the Mayans. But the Olmecs, when there was a major issue going on in their star system, many of them were brought here as refugees to survive here and wait out the issues there. Then they were brought back.

In past interviews, Goode has described his interactions with “Mica”, the representative of the Olmec group, who had previously played Goode’s role as the Sphere Being Alliance representative for his civilization.

According to Goode, neighboring star systems have experienced similar histories to our own in terms of corrupt global elites secretly allied with a group of extraterrestrials described as Draconian Reptilians. In these adjacent star systems, the Sphere Being Alliance appeared and choose a single individual to be their delegate/spokesperson in the subsequent negotiations and struggle to rid the planet of the corrupt elite control systems that plagued these worlds.

In this regard, Goode said:

Each of them has either been in contact with the Blue Avians or the Triangle-Head being and gone through a similar thing that I have in their planetary system.

Apparently, in all these worlds, the function of the Sphere Being Alliance delegate/witness was to relay what was being observed to the rest of the population. This was a critical aspect in the awakening of each planetary population, and gaining freedom from their corrupt elites and Reptilian overlords.

At this Saturn meeting, Goode says he was chosen once again to play the spokesperson for the Sphere Being Alliance members before the assembled delegates. The three Blue Avians and Golden Triangle beings that were present said they would be leaving our physical reality and would be replaced by another two members of the Sphere Being Alliance, as Goode had previously announced in 2017.

All present at the Saturn meeting were subsequently introduced by Goode to the new Sphere Being Alliance members who “began to give us some cosmic ground rules for going forward.”

They would be responsible for assisting humanity in an unprecedented era where it would not be dominated by competing extraterrestrial groups. Essentially, humanity would be fully informed about the truth of their global situation.

Of particular interest was the appearance of a group of entities called the “Sentinels” at the Saturn meeting, who are custodians of still functional Ancient Builder Race technologies that are up to two billion years old. Up to approximately 500,000 years ago, according to Goode. Builder Race technologies were used to establish a very powerful protective grid around our local cluster of 53 solar systems (52 + Sol) to keep out aggressive extraterrestrial races until it was destroyed in an internal Solar System-wide war.

The Sentinels communicated with the Sphere Being Alliance in a spectacular light show that all participants witnessed. This was very significant since it suggested that the Sentinels would continue their present role, thereby ensuring that Builder Race technologies that continue to operate would only be accessed by individuals whose ethical standards and behavior meet with the high expectations set by the Sphere Being Alliance.

Goode has previously described how “Gonzales”, a U.S. Navy Lt Commander, had been turned away by the Sentinels when he approached one of the functional Builder Race installations. The Sentinel told Gonzales that he lacked humility, and a request was subsequently made for Goode to make the same trip later to learn about the installation.

Builder Race technology is particularly relevant to nations with military-run secret space programs, such as the U.S. Navy’s  ‘Solar Warden’, wishing to extend contemporary military concepts such as “full spectrum dominance” into outer space battlefields. It is doubtful that the Sentinels would allow Builder Race technologies to be used in this way for the military benefit of a single nation or planet.

Goode was told that a new and more representative Super Federation would be assembled. Then the newly liberated and now awakened humanity would interact on a more equal basis with the different extraterrestrial groups, and would be joined by representatives from the nearby 52 star systems.

Goode also said that the December 16 Super Federation meeting had a representative from the “Council of 200” (a corrupt elite control group) seated as the head of the Earth delegation. Presumably, our newly awakened humanity will at some point choose a more representative individual as humanity’s spokesperson for Galactic affairs.

It will be very interesting to see what process is adopted by our planet’s seven billion inhabitants and/or their political representatives to choose one or more delegates to a newly reconstituted Super Federation. I highly doubt the global populace will accept major nations simply choosing a representative similar to how the United Nations Secretary-General is appointed without any kind of grassroots participation.

In addition, the Inner Earth beings will be represented in this expanded Super Federation, presumably opening the door for them to further interact with surface humanity, and publicly reveal themselves in the near future.

As to when all these stunning changes are going to be publicly revealed, Goode has discussed an upcoming series of solar flash events that will act as the trigger for full disclosure and humanity’s awakening.