Is Trump Ready to Join Israel in Launching War Against Iran and Syria? 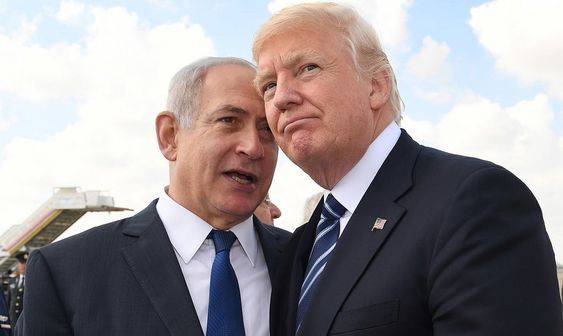 .
Part 1 – America as an Israeli Colony
https://www.reddit.com/r/conspiracy/comments/5l6yip/netanyahu_once_we_squeeze_all_we_can_out_of_the/
.
“Palestine is not the ultimate goal of the Jews; the world is. Palestine is just the place for world state headquarters….. The Jews intend to turn Jerusalem into the supreme capital of the world, and its rebuilt temple into the focal point of the Spirit on Earth. Christianity will die, the spirit will depart from the nations in our part of the world, and our present dubious democracy will be supplanted by a vast theocratic state. De-spiritualized and uprooted, homeless and lonely, yesterday’s Masters of the World [WASPs] will become slaves in all but name….”
.
“The non-Jew is an animal in human form, and is condemned to serve the Jew day and night.”— Midrash Talpiah 225
.
“The goal for which we have striven so concertedly FOR THREE THOUSAND YEARS is at last within our reach, and because its fulfillment is so apparent, it behooves us to increase our efforts and our caution tenfold. I can safely promise you that before ten years have passed, our race will take its rightful place in the world, with every Jew a king and every Gentile a slave.”
— Rabbi Emanuel Rabinovich, Emergency Council of European Rabbis in Budapest, Hungary, January 12, 1952
.
“We shall drive the Christians into war by exploiting their national vanity and stupidity. They will then massacre each other, thus giving room for our own people.”
— Rabbi Reichorn, July 1, 1880
.
“Thanks to the terrible power of our International Banks, we have forced the Christians into wars without number. Wars have a special value for Jews since Christians massacre each other and make more room for us Jews. Wars are the Jews’ Harvest: The Jew banks grow fat on Christian wars. Over 100-million Christians have been swept off the face of the earth by wars, and the end is not yet.”— Rabbi Reichorn, speaking at the funeral of Grand Rabbi Simeon Ben-Iudah, 1869  http://www.sfabn.com/html2/jm0027b.htm
.

“The Jews were now free to indulge in their most fervent fantasies of mass murder. Christians were dragged from their beds, tortured and killed by the Marxist Jews. Some were actually sliced to pieces, bit by bit, while others were branded with hot irons, their eyes poked out to induce unbearable pain. Many Christians were tied to horses and dragged through the streets of the city, while Jewish mobs attacked them with rocks and kicked them to death. The red Jews would take babies, hold them by the feet, head downward and demand that Christian women deny Christ. If they would not, they would toss the baby into the air, and another member of the mob would rush forward and catch it in the spear of his bayonet. Pregnant Christian women were chained to trees and their babies cut out of their bodies. The whole cement floor of the execution hall of the Jewish Cheka of Kiev was flooded with blood; it was a horrible mixture of blood, brains, and pieces of skull. In the corner of the execution hall were a quantity of dismembered arms and legs belonging to bodies that were not located.” — Defender Magazine, October 1933

“You must understand, the leading Bolsheviks who took over Russia were not Russians. They hated Russians. They hated Christians. Driven by ethnic hatred they tortured and slaughtered millions of Russians without a shred of human remorse. The October Revolution was not what you call in America the ‘Russian Revolution.’ It was an invasion and conquest of the Russian people. More of my countrymen suffered horrific crimes at their bloodstained hands than any people or nation ever suffered in the entirety of human history. It cannot be overstated. Bolshevism committed the greatest human slaughter of all time. The fact that most of the world is ignorant and uncaring about this enormous crime is proof that the global media is in the hands of the perpetrators.” — Aleksandr Solzhenitsyn