The People of Hawaii Are Facing a Growing and Ominous Threat

How bad could the volcanic activity get on the big island of Hawaii? Are lives at risk? How would people die if the volcano experienced a full and violent eruption?

The Threat to the Big Island Is Growing by the Moment

Hawaii’s Civil Defense Agency announced a 16th fissure had opened from the erupting Kilauea volcano early in the day Saturday, followed by an announcement at 7 PM local time of a 17th fissure. Both fissures were located in the lower East Rift Zone, east of the Puna Geothermal energy plant and northeast of homes in the Lanipuna Gardens subdivision. More on the geothermal threat later in this article.

The USGS has warned previously that boulders the size of refrigerators could be launched from the crater should another eruption take place.

The Kilauea volcano first erupted April 3, sending toxic gases into the Big Island’s atmosphere and eventually leading to more than a dozen cracks opening in the neighborhoods of Leilani Estates and Lanipuna Gardens. Even if the volcano does not fully explode people with respiratory issues are already suffering because of the great increase of pollutants in the air.

Nearly 2,000 people were evacuated from the neighborhoods last week. Many more evacuations are being contemplated

At least 35 structures, including two dozen homes, have been destroyed by encroaching molten lava. The lava is spewing out of enormous cracks in the ground, which are increasing by the moment, thus enhancing the danger. The lava has also enveloped homes and cars, by starting massive fires and encasing what was left in molten rock. This is what happened to the people at Pompeii.

An Increasing Threat: The Lava Table Is Falling

Most people would think that a shrinking lava table would mean the threat is diminishing. However, the opposite is true.

Now that the level of lava inside the main crater of Kilauea is falling. we see this as very bad for the people of Hawaii because as lava levels fall inside the volcano, sea water from the long volcanic tunnels which lead to the ocean will pour into these open cracks.  When that sea water reaches the main volcanic chamber and contacts the hot molten lava, it will quickly boil into steam, and bad things will begin to happen.

Another complicating factor consists of the consideration that as the lava level has fallen, giant rocks, dirt and other debris from the volcano walls have broken off and fallen into the volcano, blocking the main crater.  Subsequently, the steam created from the ocean water flowing-in from lava tubes could become trapped and build-up pressure.  Staggering levels of pressure will develop and eventually, the steam pressure build-up could cause the volcano to literally explode, hurling all the rocks, dirt and other material miles into the air.

The volcano could then eject “ballistic rocks” of lava up to several feet in diameter, as large as refrigerators, stated the USGS. 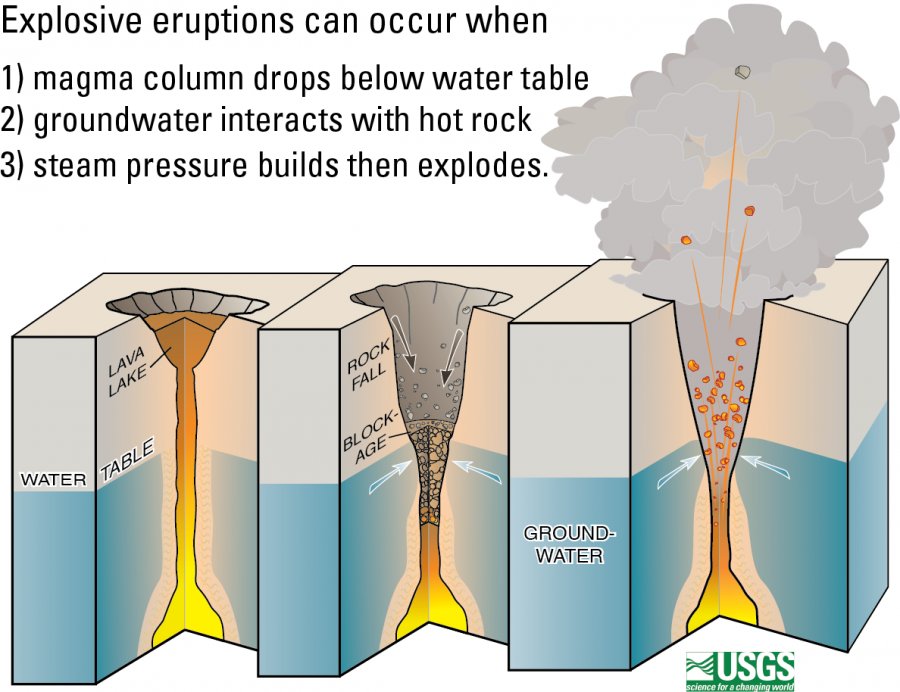 There is another grave threat facing the people of Hawaii. Lying between two separate neighborhoods is a geothermal plant that houses thousands of gallons of flammable chemicals and deep wells that pose serious risks if they overheat or are breached by seismic activity or lava flow.

In the past, local residents expressed grave concerns and actually filed law suits challenging the placement of this plant on an island with an active volcano. The name of the facillity is the Puna Geothermal Venture (PGV) has now become a major safety issue concern as result of the awkening volcano. As it turned out, the people were correct regarding the placement of the plant, and the government adopted the attitude “to hell with the people and their concerns”.

Local authorities are very concerned that the subsequent seismic activity could cause gas leaks or explosions at the plant, which is near fissures that have broken the surface. And seemingly more fissures are being discovered all the time. The risk of suffocation is high for the locals in the immediate vicinity.

How Did the People of Pompeii Die?

To determine what exactly the people of Hawaii are in for, it would prove prudent to look at the past, in another volcanic eruption.

The 79 A.D. eruption of Vesuvius was recorded by the survivor, Pliny the Younger, who was 17 years old at the time of the eruption. He wrote his account of the eruption that buried the city of Pompeii and other small towns surrounding the volcano, leaving 2,000 people dead.

After the initial eruption blew off the crater’s cap, those who weren’t killed by the rocks falling on Pompeii rooftops at 90 miles per hour were later suffocated by the ashes and gases. Could this be Hawaii’s fate?

Could a Volcani Eruption Trigger a Tsunami?

The answer to the question posed in the subtitle, it has already triggered a localized and small tsunami. Question: Could the erupting volcano trigger a tsunami that could endanger the rest of the Hawaiian Islands and possibly the west coast of the United States. The answer is a very straightforward, yes it could it could if the resulting seismic activity was large enough.

Local government officials are telling them on the other Hawaiian Islands that they have nothing to worry about. Hello, history and geology are not on the side of these weak and misleading assurances. It smells like this is a means to preserve the tourist trade. We can only hope that local officials don’t have to eat their words.

America has never faced a threat such as this. We are in uncharted territory. We are in a wait and see mode.